We had another sea day on Thursday and then arrived in Civitavecchia, the port closest to Rome, on Friday 18th May. We had train tickets booked to Rome so after a bit of a walk we were on the train. We then caught the metro to St Peters Baslica for a look once again at this wonderful building. We ended up walking far too much for Ma but she managed it....just! 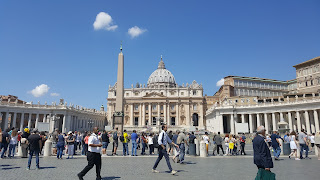 We then wandered past the Castel Sant'Angelo and decided to go inside. Not sure it was such a good idea as there were many steps up to the top. We made it to about 2 thirds of the way up to the restaurant and enjoyed having lunch there. 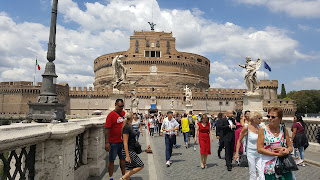 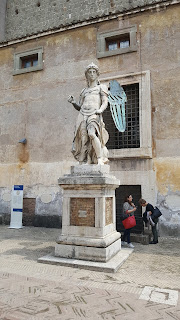 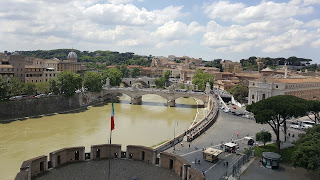 Bruce then went right to the top and below are the views from up there.

We were searching for the Place Navona and eventually we stumbled upon it. It was nice to enjoy this beautiful plaza and enjoy a gelato too. There was a fellow making amazing bubbles that you can see in the picture below. 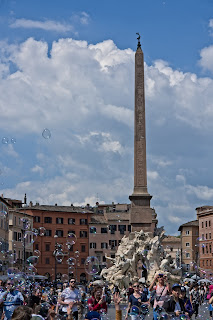 We then headed back to the train station by bus! It was an experience but I must admit the people in Rome were so kind to Ma and instantly gave up their seat for her. Our train was delayed but eventually came. We were running late but just made it back to the ship in time.
Posted by Sylvia at 7:43 PM

Big day! Glad you made it back to the ship on time!